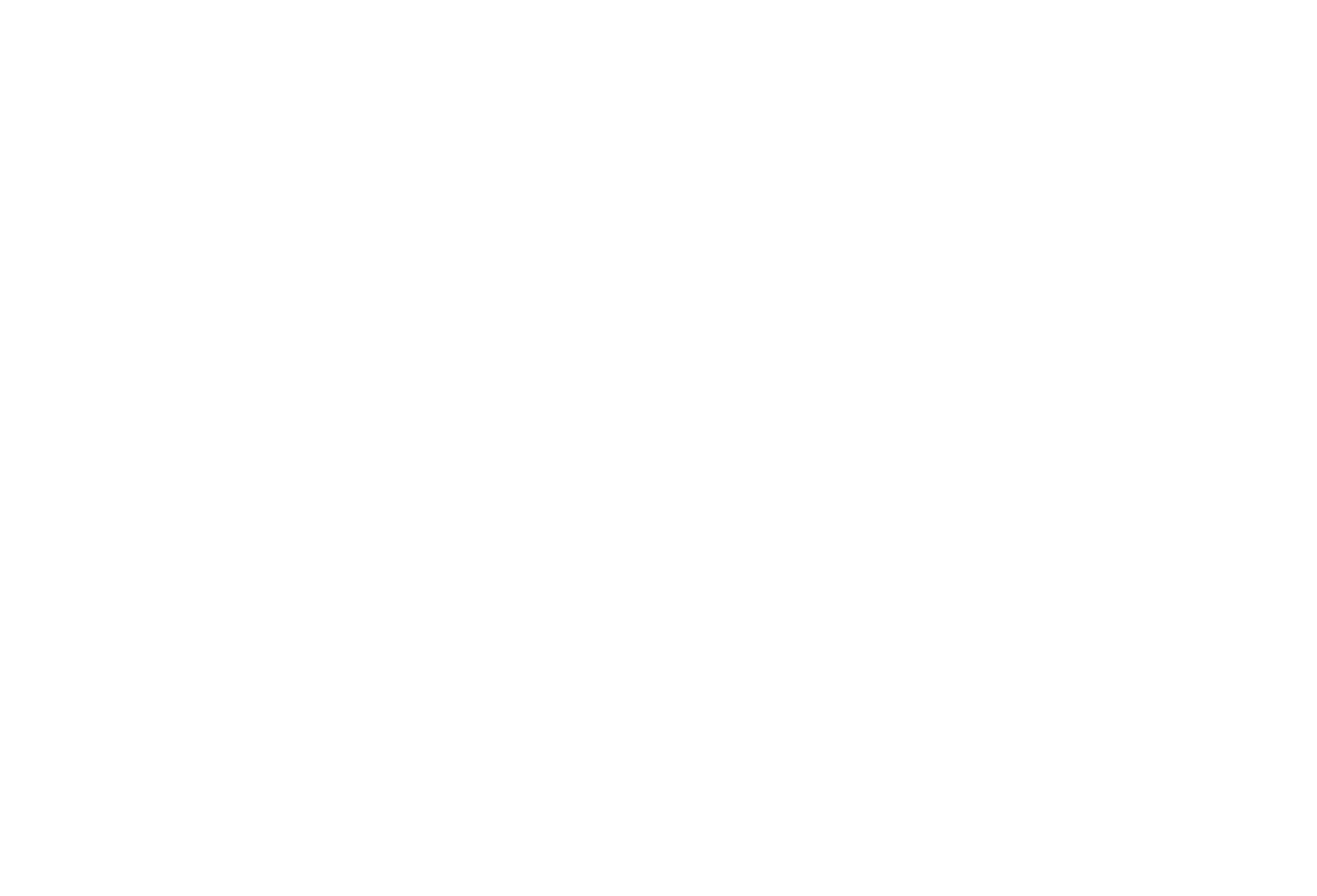 Get to Know Laurel Quady, Co-Founder of Quady Winery

Here at Quady Winery, we often talk about our heritage, our trailblazing spirit, and our longstanding belief that sweet wines can be just as artful and delicious as other styles of wine. Today we want to talk about one of the people behind our heritage and trailblazing spirit, working quietly under the radar to help our winery flourish and grow: Laurel Quady, co-founder of Quady Winery. 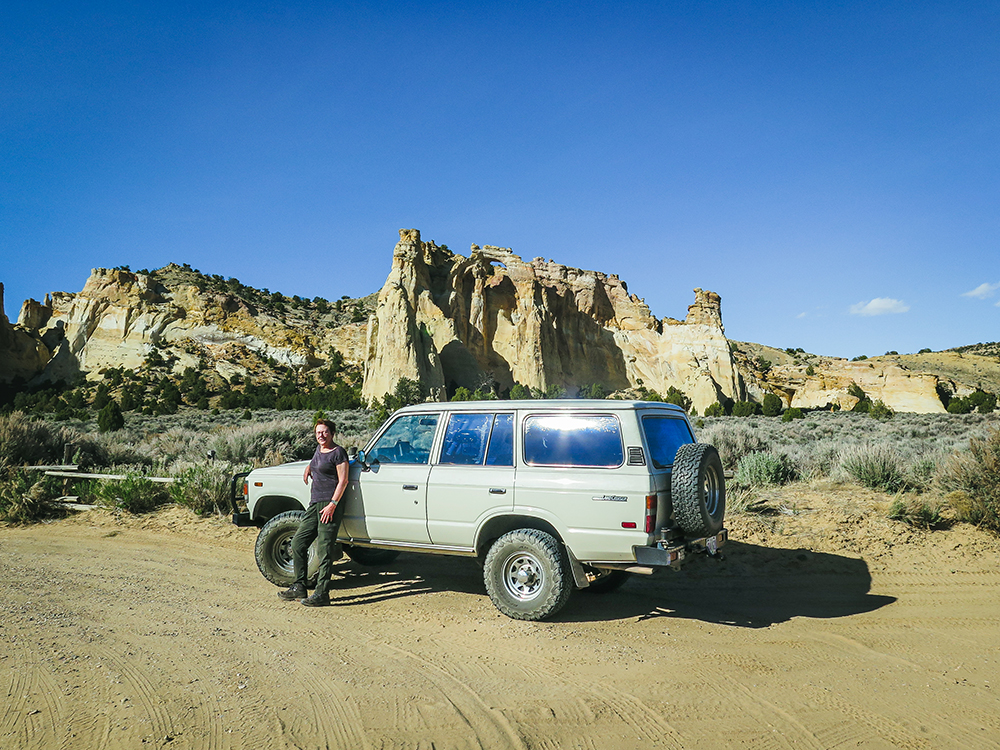 An entrepreneur in her own right, Laurel started a successful accounting practice in a new town while raising two children. Her business flourished because she was great at what she did – listening carefully to people and solving their accounting problems. Laurel’s early success provided a financial foundation for her husband Andrew to experiment with a different kind of winery, focused on port then high-quality muscat … and well, you know the rest of that story! Today, we’re telling Laurel’s story, mostly hidden, until now …

Laurel was born into a farming family in Valley City, North Dakota, the youngest of six children. Her parents sold their farm when she was 6 and moved their family to the Chino Hills area in Southern California, where Laurel and her siblings spent a great deal of time outdoors, playing in the hills or camping in the desert with their parents. 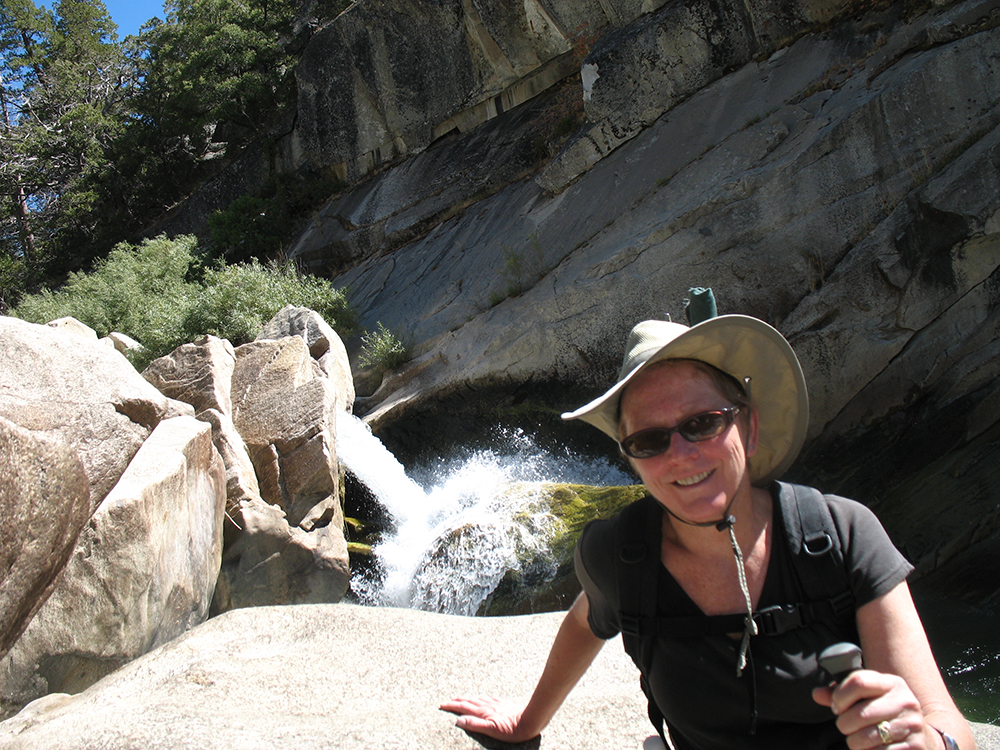 A bit shy, Laurel earned good grades in school and lettered in basketball and baseball in high school thanks to her older brother, who encouraged her sporting skills while growing up. She always dreamt of going to college and was told by a high school counselor she should be realistic about her ability to get into, afford and succeed at a 4-year college due to her socioeconomic background. True to her optimistic nature, Laurel refers to this counselor’s advice as “fortunate,” because it motivated her to make college happen for herself by working hard and applying for scholarships. After earning her bachelor’s degree in Asian Studies with a minor in American History from Pitzer College, she planned on attending graduate school in Rochester, New York, or joining the USIA (United States Information Agency) – the cultural attaché side of our foreign embassies. But something happened that changed the trajectory of Laurel’s life path: she met Andrew Quady in June of 1969.

By May of 1970, Laurel and Andy got married on a day trip to Las Vegas, and in 1971 the Quadys moved to Davis, California, after Andy decided to give up his career in pyrotechnics and study winemaking. (It was in the early years of their relationship that Laurel and Andy discovered their love of cooking together and pairing foods with wine.) 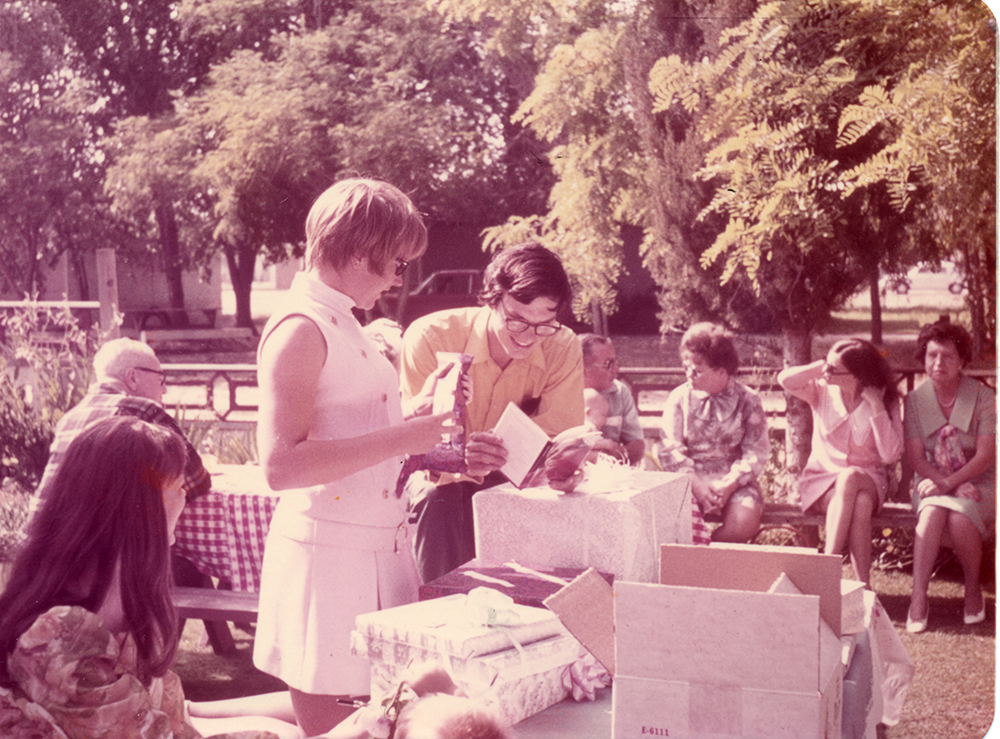 While Andy was in school, Laurel got a job to help support them. She wondered what kind of career she should pursue after Andy graduated, realizing that her Asian Studies degree likely wouldn’t be of use where ever they ended up for winemaking. Andy suggested she read a book on accounting theory, as as Laurel recalled, “I must have been still enough in love to actually read it.” She found it easy and interesting, and decided to study statistics at Davis during her lunch hour so she could qualify for the entrance requirements for the master’s program at California State University, Sacramento. Laurel earned her master’s degree and passed all 4 parts of the CPA exam on the first try, an accomplishment she has always (rightfully) been unabashedly proud of.

The Quadys moved to Madera, California for Andy’s job at United Vintners at the end of 1975, and bought their home, which was bonded as a winery, in 1977. Laurel started her own CPA practice in Madera in 1979 to help support her family and the winery. Her accounting firm, Quady & Brash, expanded quickly to serve over 250 clients in the Madera area, mostly focused on the agriculture and construction industries. 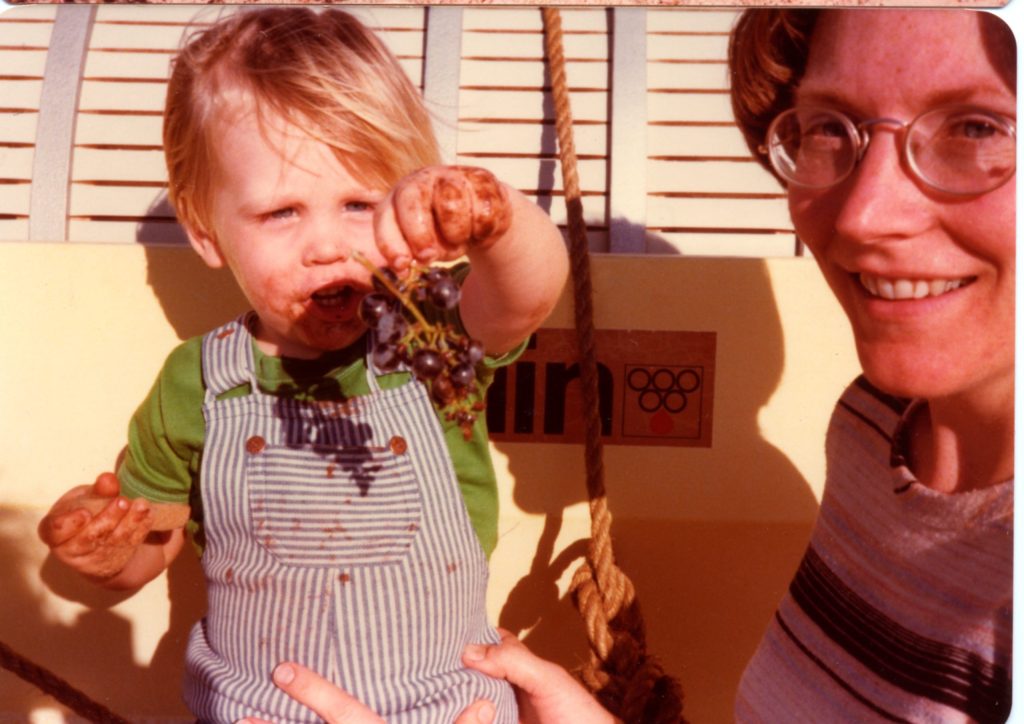 On nights after work, weekends and vacations, Laurel would help Andy at the winery, pitchforking grapes, cleaning out tanks, and conducting simple lab tests to monitor alcohol levels – sometimes while carrying daughter Allie in a baby backpack as she worked. 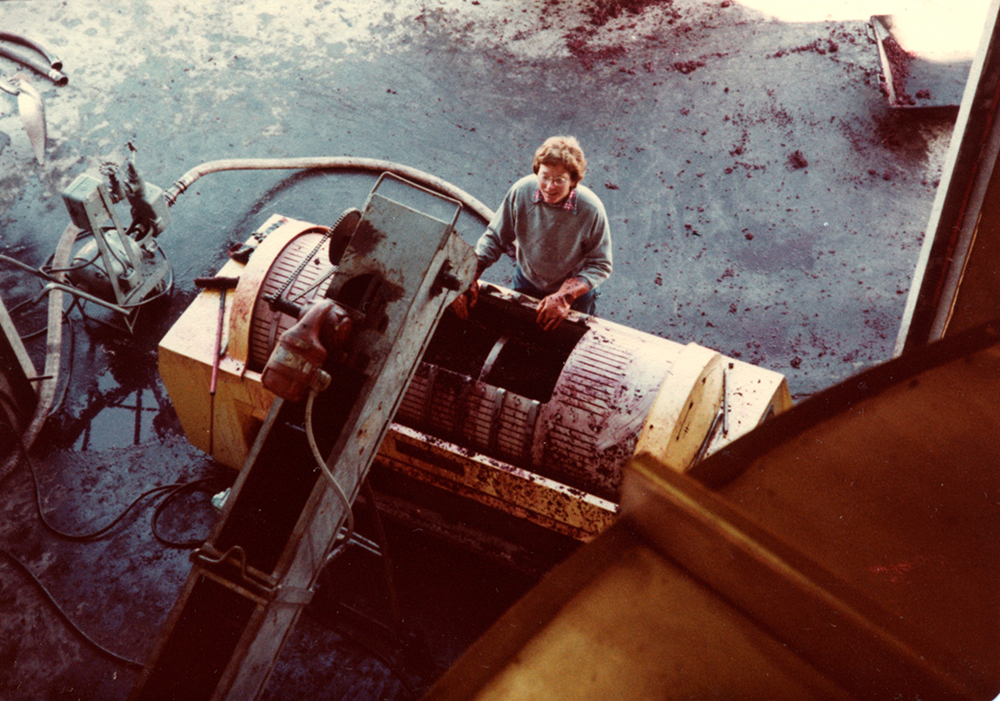 In 2000, after 20 years, she sold her accounting practice and began devoting herself to managing the winery communications and finances full time as the winery continued to grow. She traveled to Europe to sell Quady wines, took photography classes, and learned PhotoShop to produce company brochures. She is also responsible for creating Quady Winery’s first website in 1995. For the last several years, Laurel has turned her attention to mentoring the next generation of financial managers at Quady Winery. 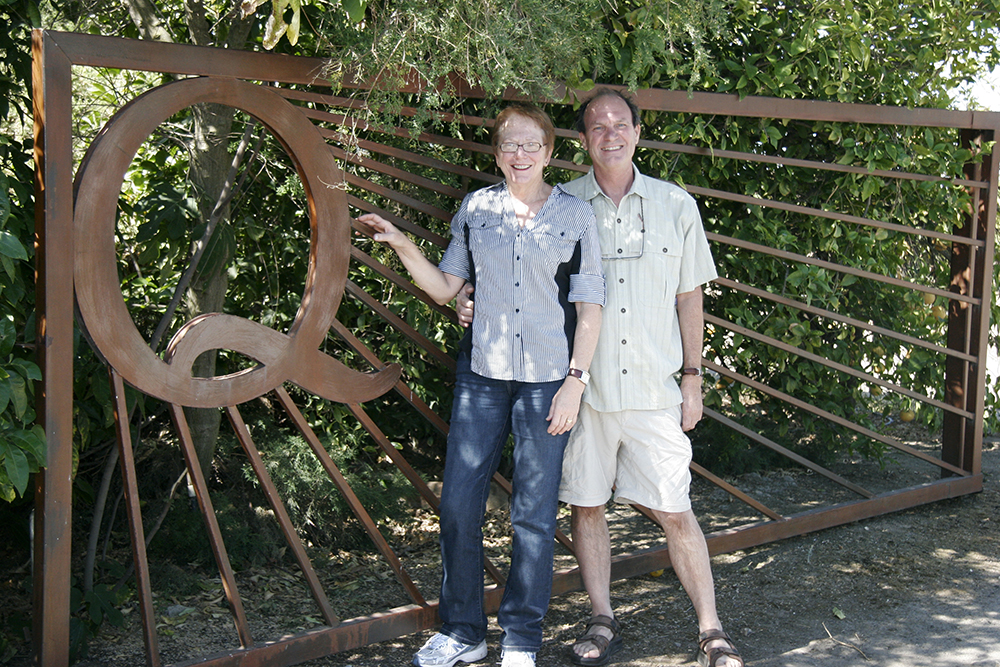 I asked Laurel what it was like to juggle being a wife, a mom, and a business owner (of her own practice and the winery):

“There were sometimes – like with anything – things seemed stressful and overwhelming, and other times when it was fun. Sometimes it was hard because I wanted to be home with the kids, and felt like I wasn’t there enough, and other times I would tell them I’m a much better mom because I’m going to work. I’m pretty lucky because I’ve had the opportunity to do a lot of things. The kids and Andy were very supportive.”

Laurel’s daughter, Allison Quady Shaylor, shared this note in celebration of her mom:

“When my Mom speaks in our weekly office meetings, I notice staff leaning forward, perking up. Why is that? There are so many traits of leadership that are celebrated in our culture, but I notice that the people in our company instinctively respond to her warmth and sincerity, her humility, and her interest in others. Without Laurel Quady, where would Quady Winery be? I sometimes wonder. It is a common trope in the wine industry that to amass a small fortune, you must start with a large one. Quady Winery had neither, but what it did have was a partner who started her own accounting business, and that business, run by Laurel Quady over 20 years, sustained its owners and their family of four while the winery struggled to reach its potential. As a CPA, her clients trusted her, liked her, and her business grew. Perseverance and optimism was always her way. She worked so hard for us, and she continues to do so, balancing the interests of everyone around her.”

Given all of Laurel’s incredible life accomplishments and experiences, it seemed remiss to not ask her about her greatest lesson learned in her time as a professional:

“Learning to really appreciate people. As a young person, I took a lot of people for granted … the older I get the more I appreciate all of the people I’ve gotten to know and have been involved with in some way over my lifetime. Right now, we have such an incredible bunch of people I get to interact with at the winery. I’ve been really fortunate. It’s also learning too, that not everyone has sincerity and integrity, so when you do find people who have these qualities, really realizing and appreciating that.” 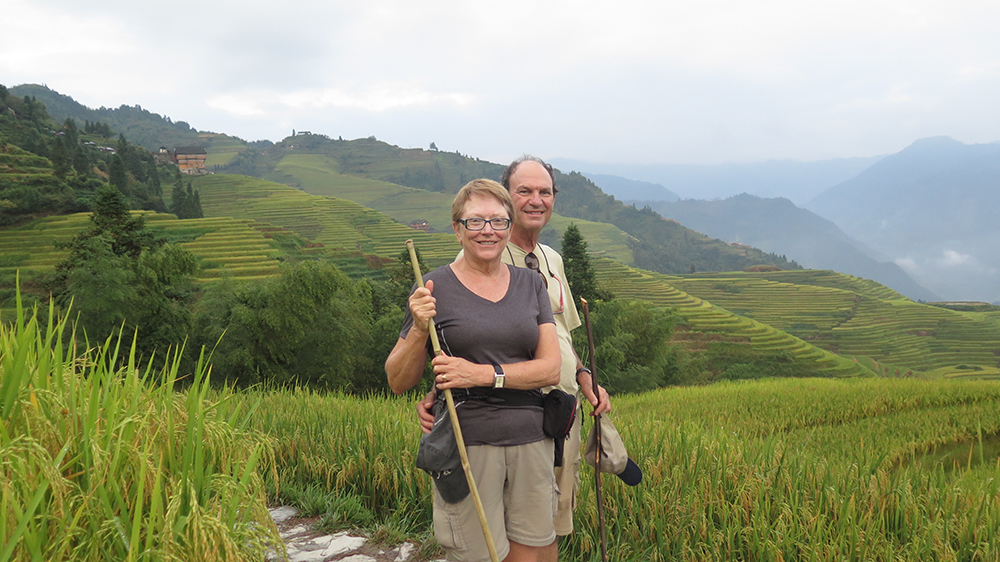 Some final words of advice from our co-founder for young people chasing their dreams:

“Be persistent, be open to change, and be flexible. Flexibility is a big one. Accept that things aren’t always perfect, but you can be cautiously optimistic. If it doesn’t work out the first week, try again the next week; and over time things get easier, especially if you enjoy what you are doing, and you enjoy who you are with. And make sure to associate yourself with people you respect – who have integrity and sincerity.”